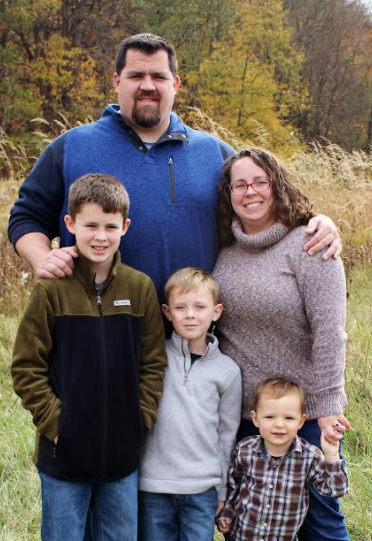 Dustin Day is the assistant Principal at Middletown Prairie Elementary School.  This is his third year in Mahomet and he loves being here!  "Middletown hosts some of the most amazing teachers on the planet, and I am humbled to work among them", said Mr. Day.

"Oh you love Mahomet so much...Why don't you marry it?"  Well, he did!  He married a Mahomet hometown gal (Danielle) and former Sangamon teacher. Together, they have 3 boys (Wyatt, Colton & Nolan) and a new dog named Charlie. He is named Charlie because they met in Charleston, IL.

Mr. Day spent much of his summer traveling back and forth on the zero turn mower. When not traveling, he would bird watch as he pruned branches and drug them to the curb. The true high point of his summer was when he had one weekend of a weed free garden. Then, he planted it and it was downhill from there.

Mr. Day is super excited to have children back at Middletown.  He loves that he gets to work for a group of people (4-8 year olds) that forever support silliness and fun.  Mr. Day says, "Let's get to it! "